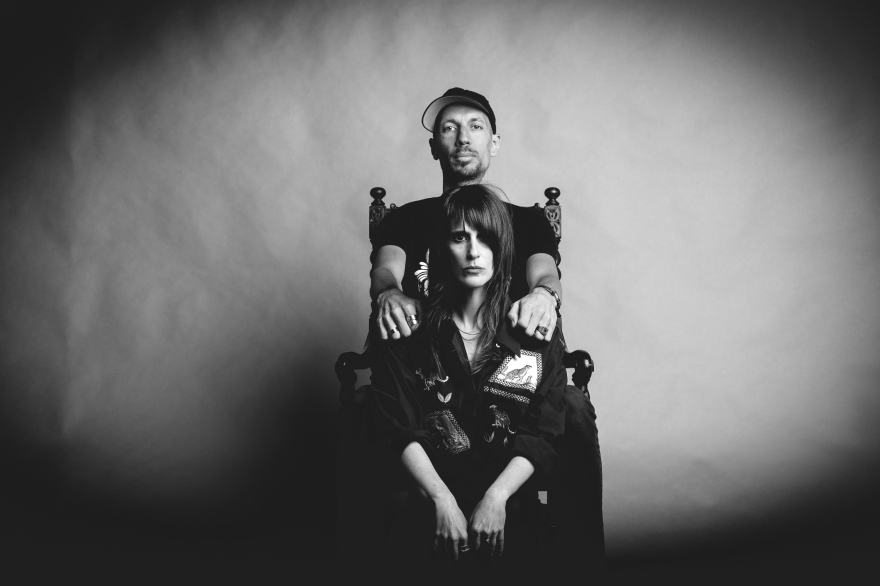 This is Queens & Kings.  Alissa (drums/vocals) and Brendan (guitar/vocals) make the kind of gritty rock that when you listen to it or see them live, you won’t know whether you want to “fight or fuck” to it (as described by Danny, one of their close friends).  If you like loud and dirty post-punk garage rock duos like Royal Blood, Death From Above, Cleopatrick, Japandroids and the Pack A.D., then do yourself a favor and check them out on spotify.

Alissa became obsessed with music at a young age, and went to university to study ethnomusicology.  Prior to Queens & Kings, you may know her from her looping project, Alissa Vox Raw (AVR), which is still active today.

Brendan started with music while still in the womb.  His Mom played piano and was a professional opera singer.  He has a picture of him playing the ukelele on the farm at 3 years old. His parents thought they were just keeping him amused, but he remembers trying to figure the instrument out. At 13 years old, he would often take his older sisters’ records – Jethro Tull, Hendrix, Jefferson Airplane, Black Sabbath and drum along with them in his basement.   Jamming to music has always been a supernatural experience for Brendan.

Alissa and Brendan met over 12 years ago.  Brendan had just moved back from Vancouver and was doing his own solo project.   He was doing the open mic circuit in Toronto and one fateful night he walked into an open mic in Kensington Market.   Alissa was doing her AVR project. Brendan was mesmerized by the performance and immediately began filming (Brendan is also an accomplished photographer)​​.

Following that night, Alissa and Brendan started hitting open mics together.  The collaboration felt effortless.  They backed each other at festivals.   They hung out. They were a couple – on and off.   Always pushing through even after break ups.  Their bond is bigger than the band.

Queens & Kings started a few years ago.    They both wanted to rock.  To have fun. To let loose. To be free. The band started as a way to vent frustrations – at the music industry and their relationship with each other.   For a taste of their chemistry, check out their self-produced/edited/directed music videos for Going Through Hell, You Got Me and I’m Beggin’.

Brendan started channeling his inner Neil Young, Hendrix, Satriani, Stone Temple Pilots, and Queens of the Stone Age.  After many years of experience with various types of percussion, Alissa grabbed a drum kit and decided to teach herself the drums.

Their live performance is visceral. Their lyrics are personal.  Their passion comes through in every song. Sometimes on stage, a fight or an argument from before the show comes alive and becomes part of the performance.  “Hate singing” has admittedly happened.  But they have nothing to hide.  They are authentically themselves. All of themselves.  And it gives the audience permission to let loose.  It’s therapeutic for the band and for the audience.

Like many others, the impact of the last 20 months has been challenging.  As soon as the pandemic hit North America, Alissa knew the next 2 years of her life would be drastically different. It was gut wrenching.  The album was recorded but Alissa and Brendan needed to recalibrate and find new ways to keep going.   She was asked by the City of Toronto to do a Facebook livestream for AVR and did a second one for a multicultural festival called “Happening Multicultural Live”.

Queens & Kings did some festivals with Dropout entertainment and a Hallowe’en special in 2020.  The trick was to keep as active as possible – which included a lot of writing on guitar and a rented electronic drum kit.   She rented lights from Long & McQuade for another Queens & Kings livestream for a Balanced Breakfast festival.  As an artist, she just used her creativity to find ways to solve problems and to find ways to keep going.   “Being a musician isn’t a job; it’s something you have to do.  We’re just problem solvers and we’re used to kicking doors down and figuring it out.”

Meanwhile, Brendan spent much of the pandemic in Cobourg, taking care of his Mom who had broken her arm pre-pandemic.

Luckily, their album was recorded before pandemic and now they had the time to do the post work during pandemic.  They worked remotely on mixing the album with their engineer Vic Florencia and continued to work on music and videos remotely and sometimes together when Brendan could come to town.  Given their ear for perfection and their attention to detail in the production process, each song has had the time to be crafted to the level they expect of themselves.

The last show they played live before lockdown was for International Women’s Day 2020 at Cherry Cola’s.  Now with restrictions rolling back, Cherry Cola’s asked them to perform for their official reopening, but they had another show booked for August 21st at Bovine Sex Club with Cigr Club and Mobius Radio.   Out of respect for the Bovine Show, Cherry Cola’s ran their burlesque shows and still gave Queens & Kings their first music night on August 28th.

With each show, they have been getting the feel for live again.  Brendan professed “If I am sweating, I am having a good time.”  And there has been a lot of sweating at these recent shows.

To stay on top of their live shows and music releases, you can follow them at: